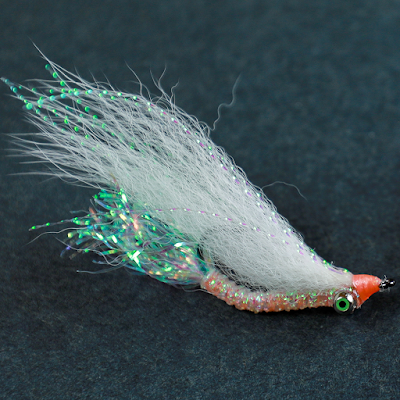 This is the only fly I use on our Andros Island trips.....period. Been the case for many years now. We have also been tying and selling this fly for a dozen or more years and have now heard from bonefishers around the world and I'm convinced it's one of the best there is for large bonefish.

This "variation" was shown to me about 15 years ago or so by friend Cole McVay while on one of our annual trips to the Andros Island Bonefish Club. His dad is actually credited with the original Gotcha fly so Cole was pretty familiar with the fly to say the least. Over the years I have tweaked it a bit by adding the Arctic Fox wing and also adding the UV resin for a bit of weight and a ton of versatility.

It is a BIG fly. Too big according to some guides in the Bahamas, but they are also most likely not putting their clients on double digit fish like we do regularly. Maybe they should try it?

If you are headed to Andros, or anywhere that big fish are found, make sure this fly is in your box! 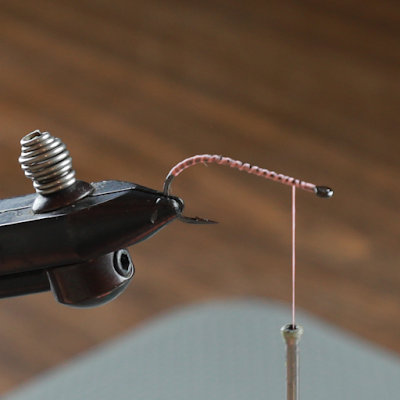 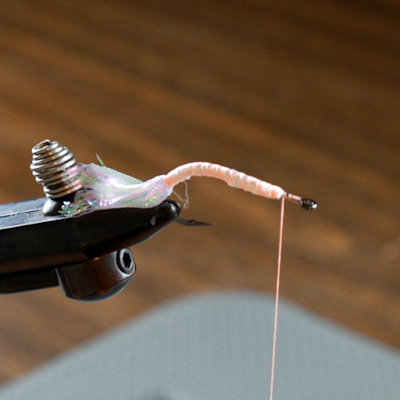 2. Take your section of Mylar Cord and double it over and tie it in where your thread is hanging, a bit behind the eye. Closed end behind the eye and the loose ends extending back off the hook shank, making the tail. Wrap back down the bend then back up to the tie in point. Cole taught me to double this up like this to create a bulkier body and also a fuller tail. Wrapping down the bend a bit creates a curved or "shrimpy" profile. 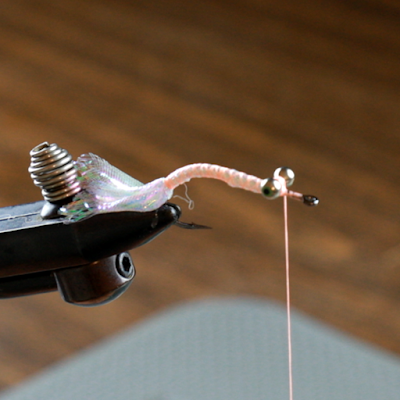 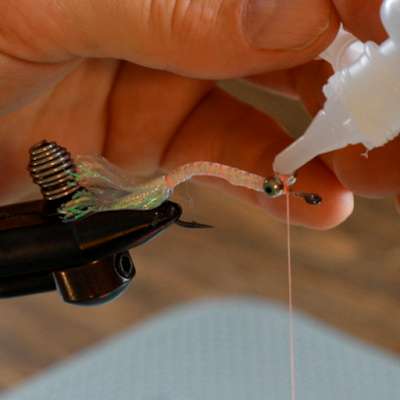 3. Tie in the I-Balz at the tie in point using the "figure 8" method. I also wrap around the base of the eye as well for added security. Then, Zap-a-Gap it and repeat the process. You don't want these to rotate! Also be sure that you leave plenty of room for the fox wing, krystal flash and a pretty pink head. 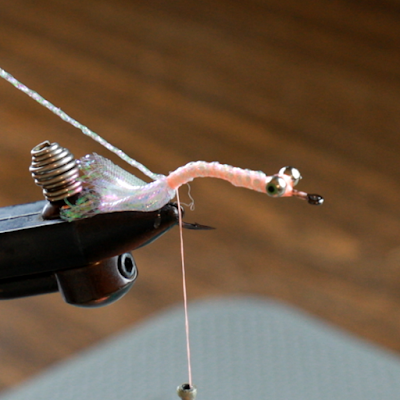 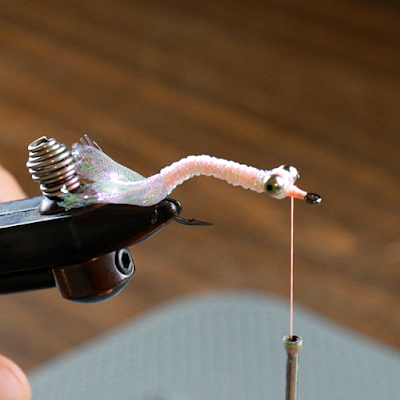 4. Tie in a long strand of the Sparkle Braid right behind the eye and then wrap the thread over it, back to the tail. Wrap the thread forward now and take it in front of the eye. I lay a base of the Sparkle Braid along the body to again create a more bulky body. Nobody likes a skinny shrimp. Now you wrap the body all the way up the hook, figure 8 around the eyes and tie off in front of the eyes. 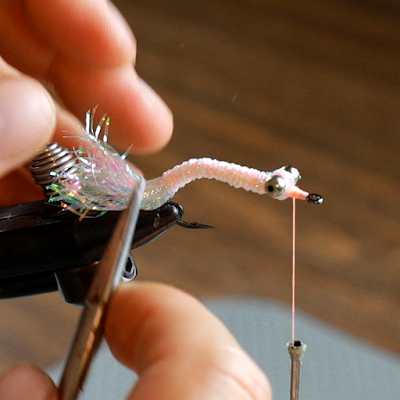 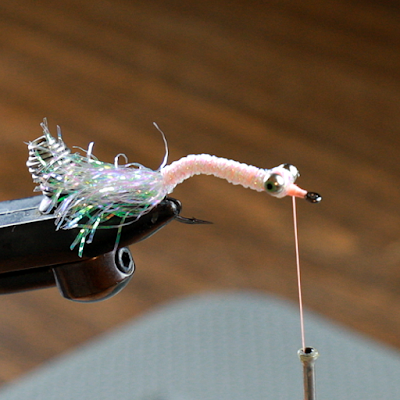 5. I now take my scissor points and fray out the Mylar Cord of the tail. Make sure to get it all "pulled out". 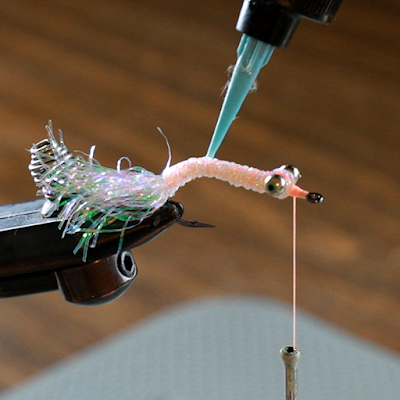 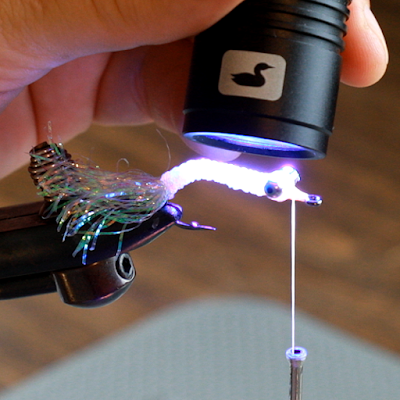 6. Now you will coat the body with the UV Resin and cure it. This has greatly increased the durability of these flies and also adds a little weight so that they sink a bit faster. Large bonefish are usually found in 3-4' of water and most "store bought" bonefish flies are not heavy enough.

If I am tying these production and a bunch at a time, I will whip finish here and set aside. If you are tying 1 fly at a time, go ahead and turn it upside down in the jaws now. 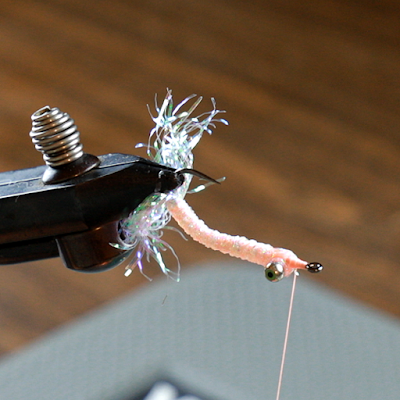 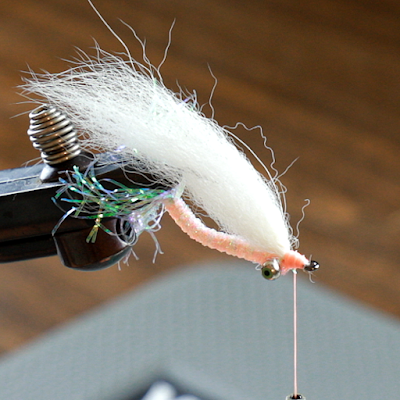 7. Tie in a clump of the Arctic Fox for the wing, just in front of the eye and wrap over the butts, creating the head of the fly. You want this to be pretty healthy and also extend back a bit further than the tail. 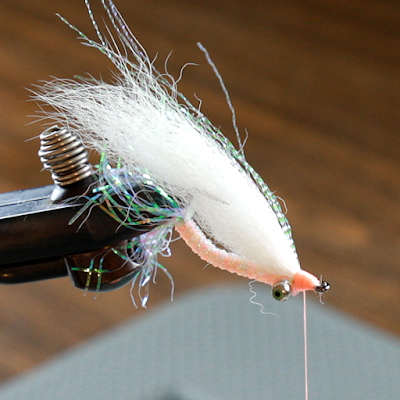 8. Add some Krystal Flash for the overwing. I usually tie in about 4 strands and then use the "foldover" method which ultimately gives me 8. You will have to trim the 2nd bunch that you fold over to match the 1st bunch. Watch the video on how we do this. 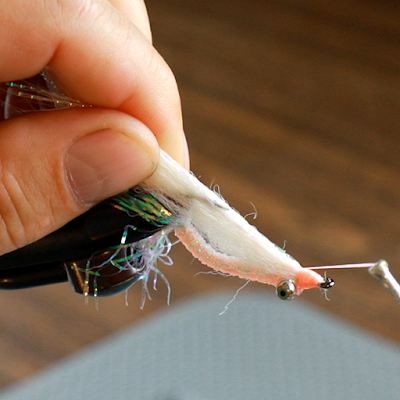 9. Finish the head! I usually just coat the thread with some Zap-A-Gap and make a few turns in front of the wing letting some soak into the wing and eyes. There is no real need for a knot at this point but do whatever you are comfortable with. I then of course coat the entire head with the UV Resin and cure it.

That's it! Those who have fished Andros with us know this fly. I hope that you get to know it as well. 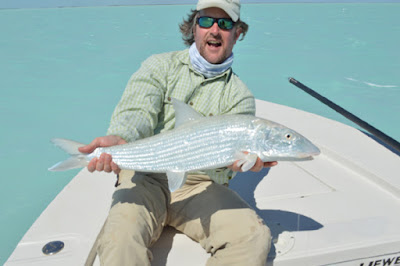